Looking at Tunisia Mobile browsers statistics, there was a surprising spike in the curve. I wondered what could be the reason of this sudden increase. As you may know, Tunisia went recently through a lot of political events. Citizens revolted against the president and a new temporary government has been put in place. There are details on the English wikipedia page about the events but if you can read French, I would recommend the French version. I was wondering if the spike was due to more people in the street and then using a mobile browser. In fact, it is difficult to know. The spike starts on January 13 when the now former President announced he will not run again for the next elections and promise the Press and Internet freedom. This didn't put an end to the uproar of citizens and the next day, fights between the army and the citizen were happening in the streets. 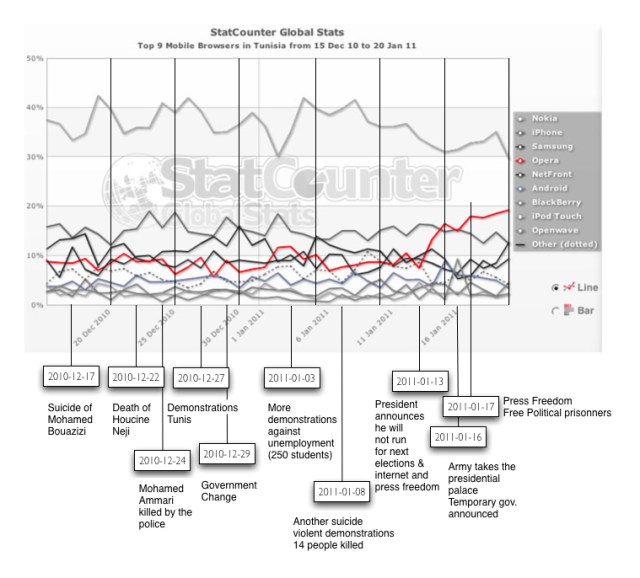 I still wonder why this spike has happened, maybe the people, maybe something else. It is difficult to know. Opera Mini using big proxies through the world has been used sometimes to bypass the local censorship. (Update Opera Mini servers were used to be blocked in Tunisia. That might explain the spike if suddenly the users had access to more resources on Internet.)

The mix of social and technology changes has always fascinated me.