It all started with a comment from [redacted] about a talk on Microformats and Semantic Markup.

Note to self: talks on semantics are boring.

Writing well is a source of costs, except for passionate people (whatever your passion is). Without showing what it brings (aka the benefits), the efforts of creating good markup is mostly cumbersome. The winner argument is the me, not a theoretical one, but one which has a direct, “visible” impact on my time, my ease editing the document.

People used h1, h2 to make bigger texts or ul to indent text, because it was directly visible. It was showing what they wanted to convey as a meaning even if it was machine meaningless. The feedback loop was very short and then the effort quantifiable, palpable.

How do we encourage Semantic Markup?

Most of the authoring tools I know do not help you write good markup, be text-only or wysiwyg. Right now, The editing window for this article proposed a series of iconic metaphor for putting markup around texts. 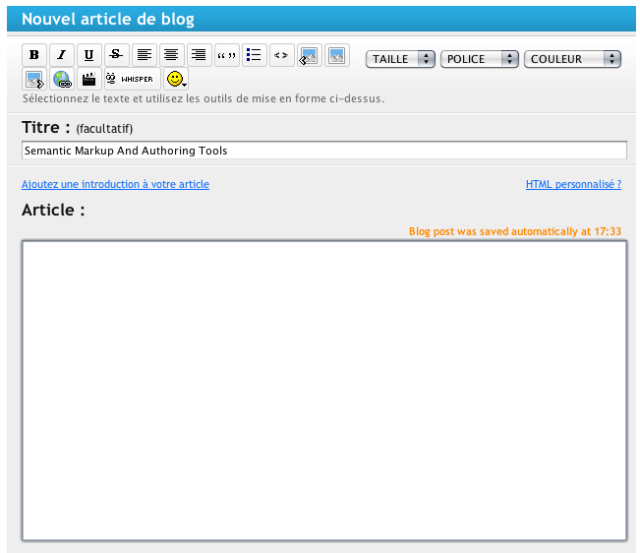 But is it really what I need? Why should I put a strong element here? Why using a h1 or h2? or a blockquote for this piece of text. It doesn’t make my life easier on the longterm. It doesn’t leverage the knowledge I have pass through the tools.

Imagine a few cases such as (There are probably hundred more):

Coming with the tools and examples which have a direct impact is what Authoring tools developers should focus on not only how to throw tags around text.