For example, someone on an iOS device receiving mobile content, when another user on a Firefox OS device receives the desktop content. blocking User-Agent sniffing, tailored JavaScript for particular browsers, CSS customized for one browser, etc.

Once we have contacted the Web site, and hopefully the site fixes it, we can close the bug and dance on the sound of Fame by Irene Cara. (Yes that is the moment where you can make fun of me, because I show my age). Note that it's not about the money. But like any moments of fame, it shattered quickly when the Web site owner decides to go on a Web site reform and we are back to square one… Regression! If we know about it.

So it's important that little by little, we accumulate tests about the already fixed Web site so we can monitor in the future, if they continue to behave correctly. And if not, nag gently the people about the renewed breakage.

Discover sitecomptester-extension, a SlimerJS test runner which runs in-browser site compatibility tests. This has been developed and maintained so far by Hallvord. If you wandered by chance here and you are a WebKit developer, it's the equivalent of PhantomJS but for Firefox. It's also compatible with casperJS which makes your work easier for testing.

The core mechanics of the applications exists in two files:

This engine helps us discover if the site has an actual regression or if the Web site has changed in a way that makes the tests invalid.

A practical example: The Economist

In the past, when accessing The Economist Web site with a mobile device, it was redirected to the mobile site http://m.economist.com/, except for Firefox for Android. So a bug had been opened last year. We contacted and they fixed it. (Oh yes… if you are wondering, contributing to Web Compatibility work is a very good way to understand the structures of companies and to make good contacts everywhere in the industry.)

The test for the mobile domain name of the economist in the previous situation was:

Each of these tests is fairly simple.

Note that we have an additional bug which is about Firefox OS not receiving the mobile version of the site. It currently receives the desktop content and so we have a test for this too.

(This assumes, you have a github account and SlimerJS has been installed)

You will first need to fork the Hallvord repository. Then you need to clone it on your local computer.

To not mess up things to much, it's often a good idea to work in a branch. Let's do that.

Now when typing git branch -a, you should see:

It gives a list of all branches and the one you are in marked with *. Now we can go on and edit the projects. Use your favorite code editor and let's go give a bit of love to the tests.

The fix is very simple. We just need to change the domain name.

but we need to check if our fix is useful. We open Firefox and load the http://www.economist.com/ aka the Web site we need to test. We open the "Web Console" in the menu Tools/Web Developer. In there, we type:

This will load the list of functions that hallvord is using in the more general code. You can host it yourself if you prefer to do it on your side. Then we can type the name of the functions we need to test. Still in the console, we now type:

The results should be false, because we are accessing the desktop site. As we can see in that screenshot. 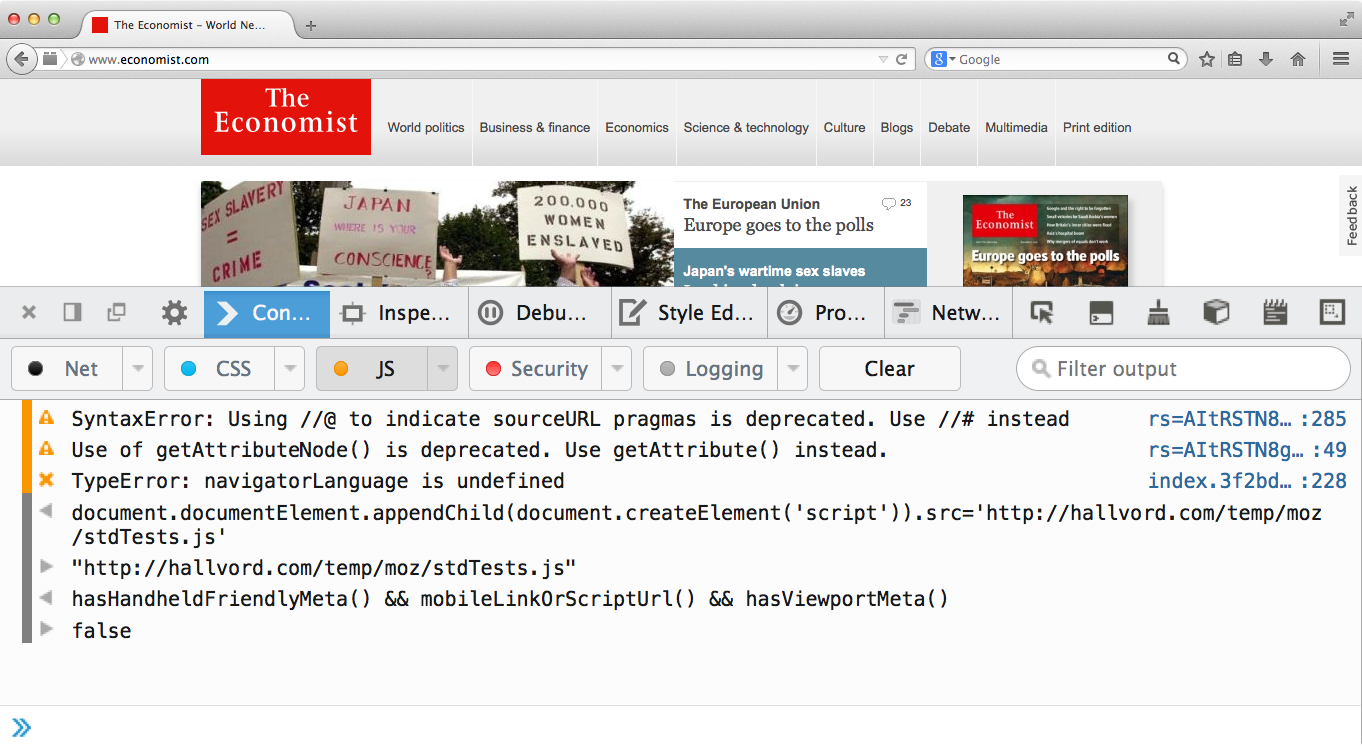 Let's switch the User Agent string of the browser to emulate Firefox on Android. Be sure to erase all cookies before redoing that test. 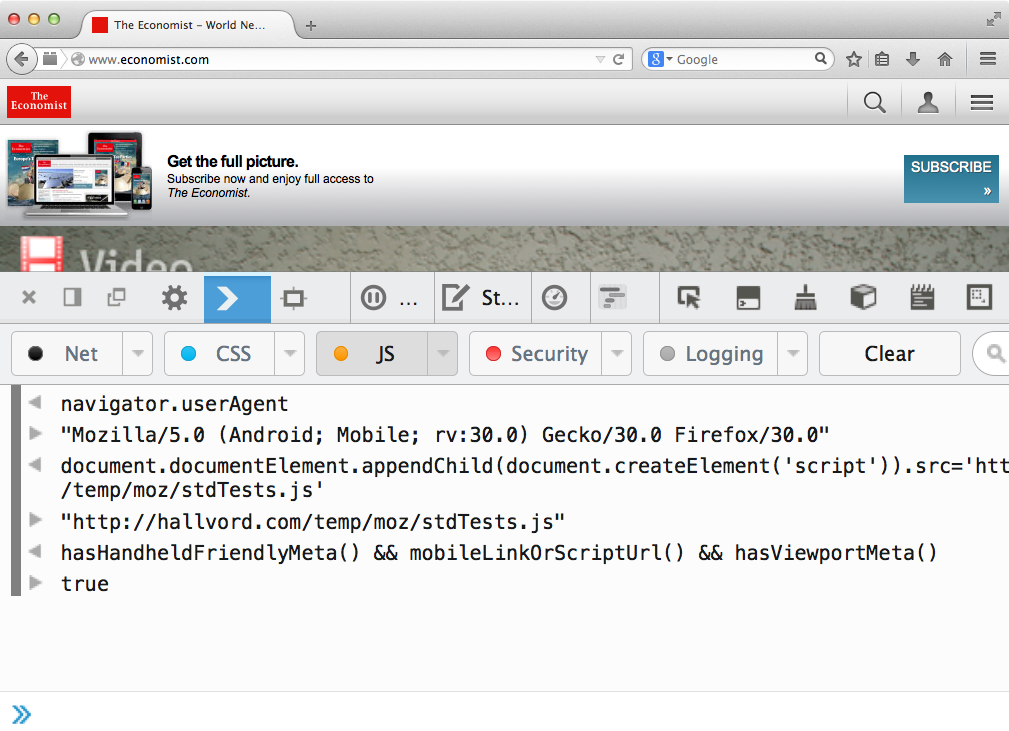 Now we can see that the test is true. Everything is working! We can commit our change.

we can push it to our repository on github.

Finally we can create a pull request on hallvors repository, so he can add it to his own repository. We go to github on Hallvord repository and you should see something like.

And leave a love message to Hallvord.

We fixed our first test. Fame. You can tell I like it. Many bugs and sites do not have tests. You can contribute more tests. Thanks!