Contributing to Mozilla projects can be done in many ways. This week, a Webcompat bug about behavior differences in between browsers led me to propose a patch on Firefox and get it accepted. I learned a couple of things along the way. That might be useful for others.

It started with a difference of behavior in between Chrome and Firefox on Android devices for Nikkei Web site reported by kudodo from Mozilla Japan. I looked at the bug and checked the differences in Firefox 40 (Gecko 40) and Opera 30 (Blink/Chrome 43).

Indeed the placeholder text appears in Gecko and not in Blink.

What was happening? I started the inspectors in Gecko and in Blink looking at the CSS properties used in both cases. The CSS didn't have any WebKit differences (for once).

On the Opera/Blink inspector, I noticed in the inherited properties from the user agent stylesheet (aka the default style that any Web page inherits from browsers).

Gecko didn't have the box-sizing: border-box; for input[type=search] in its default CSS.

I tested in the inspector adding it to the stylesheet of the Web site, and noticed it was indeed fixing the issue in Gecko without creating an issue in Blink. Good! We need to contact the Web site so they can modify their CSS.

That said, fixing this particular Web site will not fix all the other sites on the Web which might exhibit the same issue. We also need to advocate for the same default rendering in Gecko (Firefox), Blink (Chrome, Opera, UCWeb, …), WebKit (Safari), Spartan (IE) and Edge (new MS browser). This led me to two questions:

I added a comment on the bug that it was creating a Web compatibility issue. Then I went on a journey to find where the user-agent stylesheet was in the source code repository of Mozilla (Quick Tip: You may want to search old bugs related to the same area in bugzilla, then you might find where you need to look at in the source code with previous patches). So I finally found that the user-agent stylesheet was managed in layout/style/ and that the file forms.css seemed to be pretty close from what I needed. I proposed a patch which was fixing the issue but was not perfect. I made mistakes and it's ok. Boris Zbarski and David Baron helped me to get it straight.

Creating A Patch On Mozilla Central

These are the steps on the command line.

Once the modifications on the code are done and the patches are ready, you can attach the patch the bug on bugzilla. 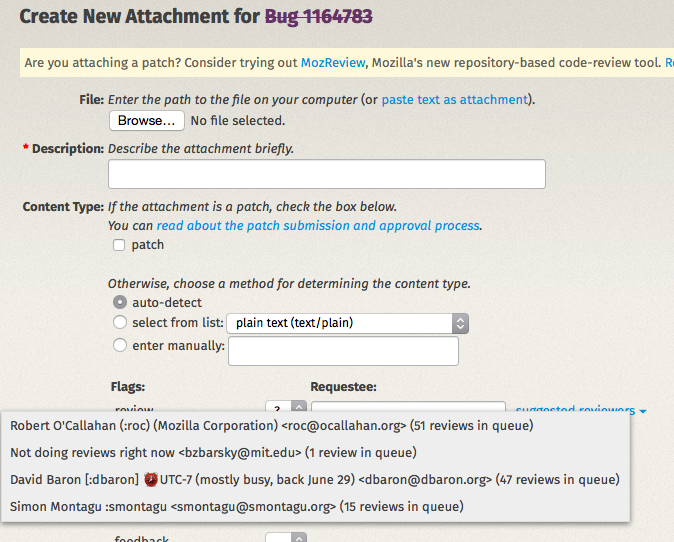 If the the review is positive with r+ you can go on and add checkin-needed in the keywords of the bug. A committer will add your modifications to the next release of Firefox.

If the review is negative r-, read properly the comments which have been given in the review. Create another patch and attach it to the bug. At the same time, tick the box for the obsolete option on the previous patch.

The patch for input[search] should appear in Firefox 41.

Opening A Bug On HTML Specification

The input[type=search] default rendering was not defined on HTML specification. I opened a bug on W3C issue tracker so the specification could be fixed and if a group was implementing a new rendering engine, they would not have to reverse engineer the behavior of other browsers.