Once you click the button, it sends a report to webcompat.com with a screenshot, the URL and the details of the user agent. The button is not in one's face. It is hidden in the three stripes menu on the top right.

So the button was released in a Firefox Nightly version of the week-end. On Monday morning, the first two persons to triage the bug are Eric Tsai (Taiwan) and me (Japan). We welcomed a flood of crashing issues related to video on Windows 10. It's a perfect storm. The combination of a bogus code in Nightly (which is the purpose of Nightly) and the release of the new button made our cursing during the day on IRC.

We can't do a lot of things about crashing issues without clear steps to reproduce and/or a trace.

A UI Step Back

While we were processing the flow of incoming bugs, a new one every 10 to 20 minutes, we started to discuss with Eric about what was wrong and what could be done.

The button says Report Site Issue This is a very generic label, which covers indeed all type of issues. And indeed a crash, a security issue, a certificate issue can all be felt as something interesting to report.

The form of webcompat.com tries to reduce the scope of this report, but still it doesn't say anything specific about web compatibility such as for example does it work in another browser? (We want to fix this).

The crash tab UI is leaving the user with two choices:

Given what happened on Monday, it seems that users want to report that there was an issue. They went through all the trouble of trying to find a place where they could report it with a button they didn't know it existed (because the button had just been released).

Firefox has another piece calling for actions from the user in the Help menu. 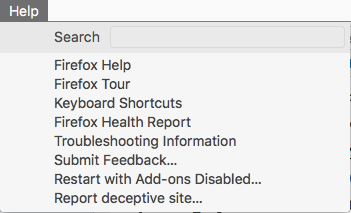 More specifically, we can find:

There is also another screen asking users for feedback about wrong unsecure connection. At least this one is automatic, and has a checkmark for automation, but also an advanced button for letting people give more information. 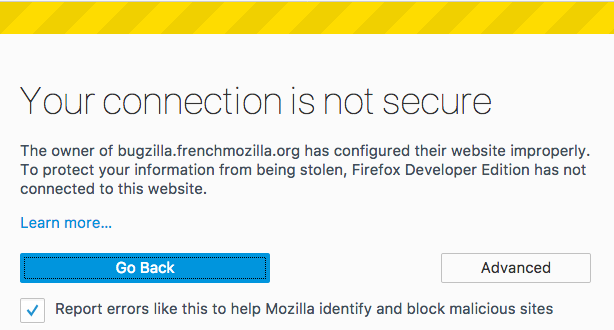 What Do We Do?

So it seems that the Report Site Issue button is the most direct choice that users have when they are having an issue, but it also means that all sort of issues might land on webcompat.com with the double effects of

So we need to find a better to gather feedback maybe in both reducing and atomizing. Maybe the report site issue is larger than webcompat.com and it should have an intermediate screen asking what kind of issues the person is reporting and redirecting to the right place. Hard to know. It needs UX and user testing. It's an interesting problem to have.

For now, we will continue to monitor on webcompat.com what this button generates.