Dennis recently shared his concerns on knowing what others are working on in the Web compatibility team. Working in a entirely distributed and growing team comes with its shares of benefits when handled well. What Dennis is voicing as a concern is a room for improvement.

How distributed is the Web Compatibility team? The places by time zones:

None of us share a unique location. And we meet altogether or some of us during Mozilla All-Hands or work week meetings. I haven't met yet, for example, Ola who is working from Berlin, Germany. This blog post probably relates to the one a couple of weeks ago on working in the open.

I have been working since 1994 and remotely since 2001 (except for two years in Montreal in a Web agency), so basically around 14 years on 23 years of work. W3C, Opera and Mozilla. It works very well when everyone is participating into a shared culture. The best shared culture I have met so far is still W3C. The W3C staff (around 70 persons at my time 2000-2008) had mainly three big weekly staff meeting. One in Japan, one in USA, one in Europe. You could choose the one you wish to attend weekly. The agenda was built around the local issues. People could join physically on site or by phone. Meetings where directly scribed on IRC, with a bot helping for minutes taking and agenda management. For each meeting, a chair is in charge of managing the agenda and a scribe of taking minutes. The scribe is being rotated on the basis of the oldest note takers. Others can help take notes and fix directly (s/old_comment/new_comment/ syntax) on IRC the notes when misundertood, missing, etc. The bot was then directly generating minutes on the Web site at a unique URI. Those who participated to W3C working group meetings are used to this. Example W3C TAG: Agenda and Minutes. The script for generating the minutes is a perl script called scribe.

Back to Dennis' comment on knowing what others are doing. Before the W3C staff weekly meeting, everyone was encouraged to send their 2 minutes. It is a very rough summary of things you have done during the week and you think are worth sharing with the rest of the team. Sometimes, some people are also sharing personal items (museum, trip, books, cinema, etc.). I tried to dig an old email not containing anything W3C-staff private. 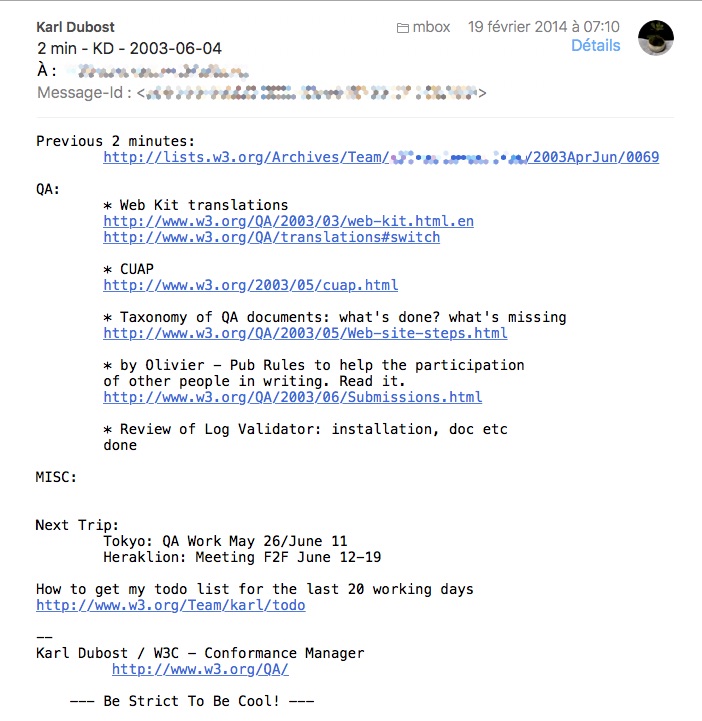 The way it was working.

Sometimes reading a two minutes email was helpful for creating a new agenda item on the meeting for asking clarifications or for proposing help. The two minutes have never been really a burden, except remembering what you did during the week.

At Mozilla in the Web Compatibility Team, we do a couple of things:

For the two minutes, we tried in the past to use the statusupdates created by Benjamin Smedbergs but he stopped it. We were not successful doing it. Basically mostly Hallvord and I were making the effort. And there's no point to try to enforce something that people are unwilling to do. We need to find a more natural process.

One of the reasons I started my weekly worklog on this blog is because I wanted to keep track on what I was doing. Some weeks I do well. Some others less so.

Dennis shared with me, the other place that people use for sharing their work at Mozilla. It seems to work on an atomic message basis.

So Dennis had a good question and we probably need to improve by finding a solution which works for us. His suggestion is an oral report. I like written form. The reason is that the written form makes it possible for people who are not attending because of time zone issues, travels, etc. can still have a sense of what is happening. The oral form could still be done if it's not too long like we were doing at W3C.