I was invited by Sandra Persing to participate to the Mozilla Developer Roadshow 2019 in Asia. The event is going through 5 cities: Tokyo, Seoul, Taipei, Singapore, Bangkok. I committed to participate to Tokyo and Seoul. The other speakers are still on the road. As I'm writing this, they are speaking in Taipei, when I'm back home.

Let's go through the talk and then some random notes about the audience, people and cities.

The talk was half about webcompat and half about the tools helping developers using Firefox to avoid Web compatibility issues. The part about the Firefox devtools was introduced by Daisuke. My notes here are a bit longer than what I actually said. I have the leisure of more space. 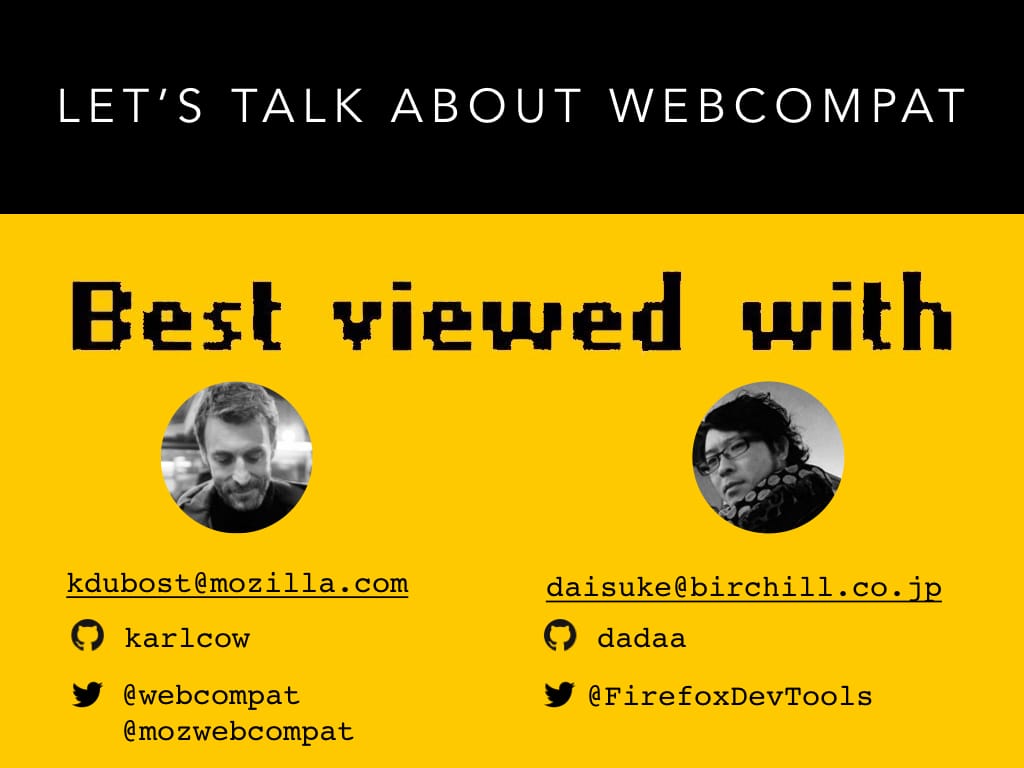 The market dominance by one browser is not new. It has happened a couple of times already. In an article by Wired on September 2008 (Time flies!), they have this nice graph about the browser market share space. The first dominant browser was Netscape in 1996, the child of Mosaic. It already had influence on the other player. I remember how the introduction of images and tables. For example, I remember a version of Netscape where we had to close the table element absolutely. If not, the full table was not being displayed. This had consequences on the web developer job-At that time, we were webmasters. This seems to be a good consequence in this case by imposing a cleaner, leaner code. 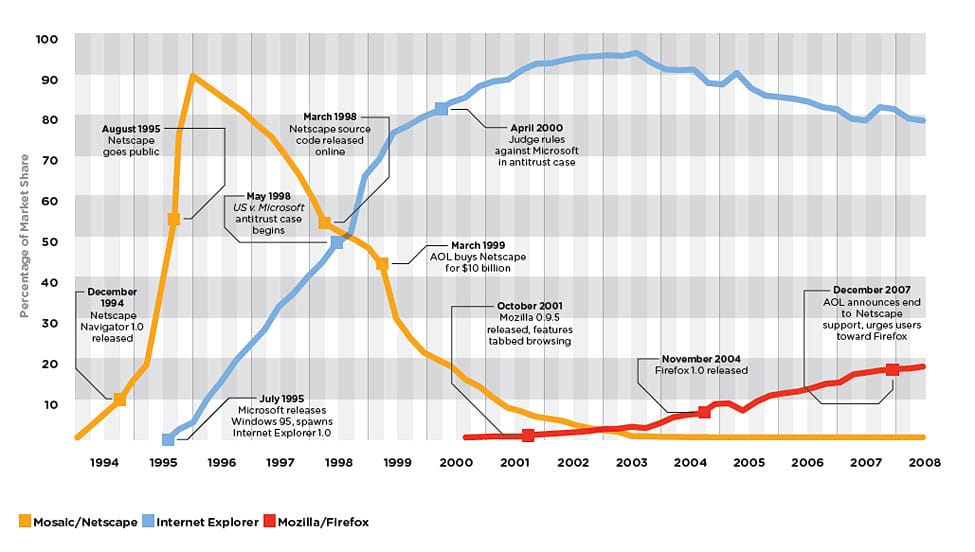 Then Internet Explorer entered the market and took it all. The browser being distributed with Windows, it became de factor the default engine in all work environments. Internet Explorer reached his dominance peak around 2003, then started to decline through the effort of Firefox. Firefox never reached a peak (and that's good!). Probably the maximum market share in the world was around 20%-30% in 2009. Since there has been a steady decline of Firefox market share. The issue is not the loss of market share, the issue is the dominance by one player whichever the player is. I would not be comfortable to have Firefox as a dominant browser too. A balance in between all browsers is healthy.

note: World market shares are interesting, but they do not represent the full picture. There can be extreme diversity in between markets. That was specifically the case 10 years ago. A browser would have 80% of the market share in a specific country and 0% in another one. The issue is increased through mobile operators. It happened on Japan market, which went from 0 to very high dominance of Safari on iOS, to a shared dominance in between Chrome (Android) and Safari (iOS). 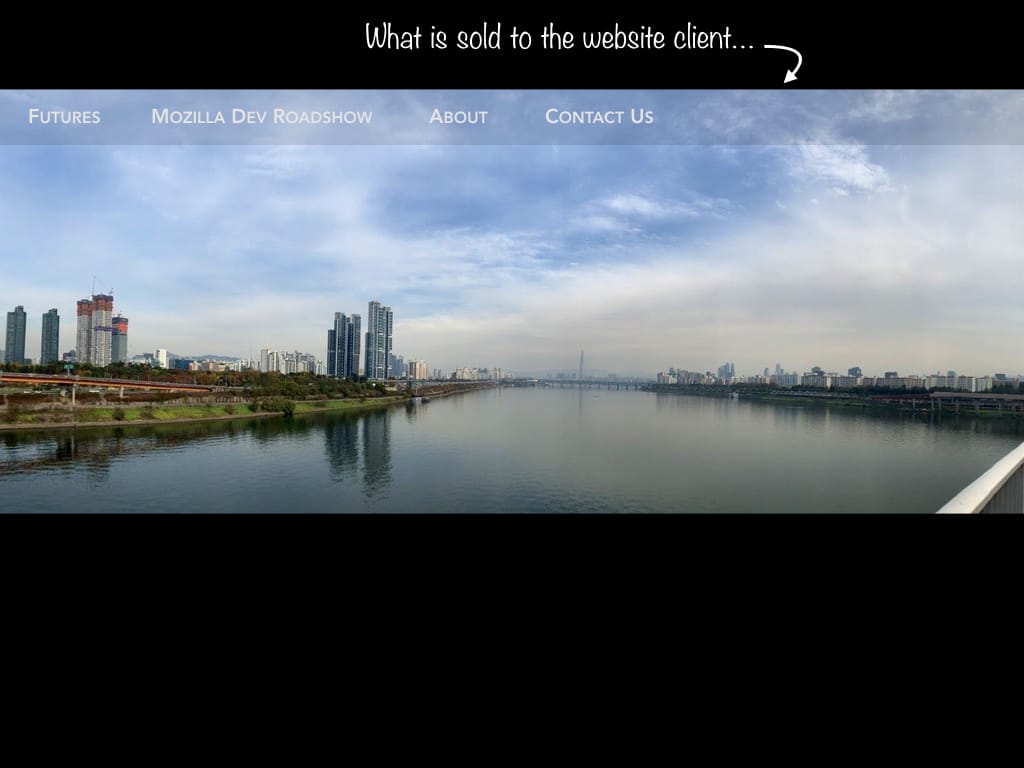 When a website is sold to a client. We sell the package, the look and feel, the design. In the cases of web applications, performances, conversion rates, user engagement pledge will be added into the basket. We very rarely talk about the engine. And still, people are more and more conscious about the quality and origin of food they buy, the sustainability of materials used to build a house, the maintenance cost of their car.

There is a lot of omissions in what is being promised to the client. This is accentuated by the complete absence of thinking about the resilience of the information contained on the website. Things change radically when we introduce the notion of archivability, time resilience, robustness over devices diversity and obsolescence. These are interesting questions that should be part of the process of thinking a website.

years ago websites were made of files; now they are made of dependencies. — Simon Pitt

A simple question such as "What the content of this page becomes when the site is not updated anymore and the server is not maintained anymore?" A lot of valuable information disappears every day on the Web, just because we didn't ask the right questions.

But I'm drifting a bit from webcompat. Let's come back on track. 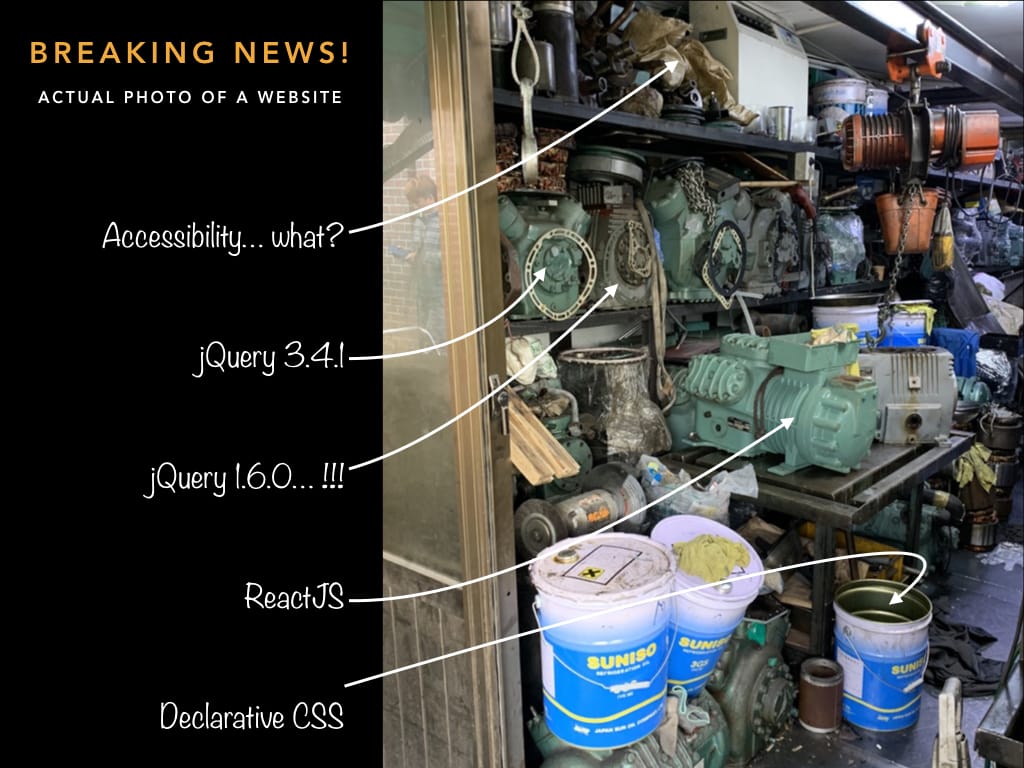 This is dirty, messy, full of dependencies, and forgotten bits. Sometimes different version of the same library is used in the code with conflicting ways of doing things. CSS is botched, JS is in a dire state of complexity, html and accessibility are a deeply nested soup of codes where the meaning has been totally forgotten. With the rise of frameworks such as ReactJS and their components, we fare a lot of worse in terms of semantics than what we did a couple of years ago with table layouts.

These big piles of codes have consequences. Maintainability suffers. Web compatibility issues increase. By Web compatibility I mean the ability of a website to work correctly on any devices, any context. Not as it should look the same everywhere, but as in any users should be able to perform the tasks they were expecting doing on it. 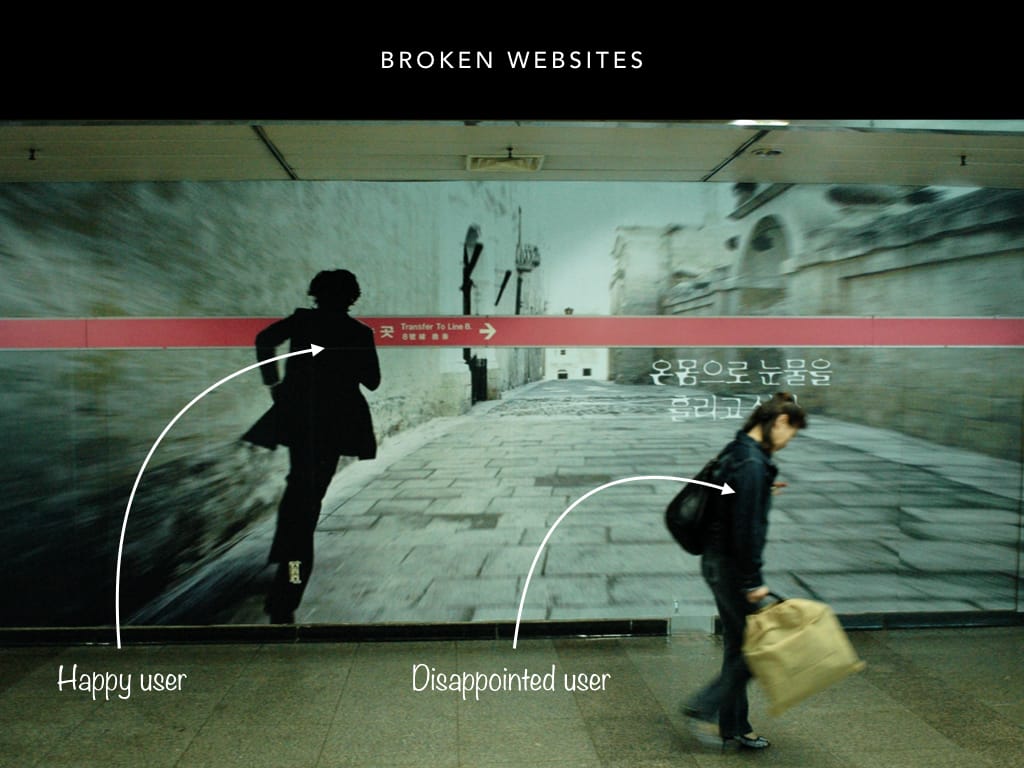 The user who decided to use a specific browser for personal reasons is the victim. They are caught in between a website not doing the right thing, and a tool (the browser) not working properly. If you are not the user of the dominant browser of the market, you are up for a bumpy ride on the Web. Your browser usage becomes more a conviction of doing the right thing, more than making your life easier.

A form to save the Web 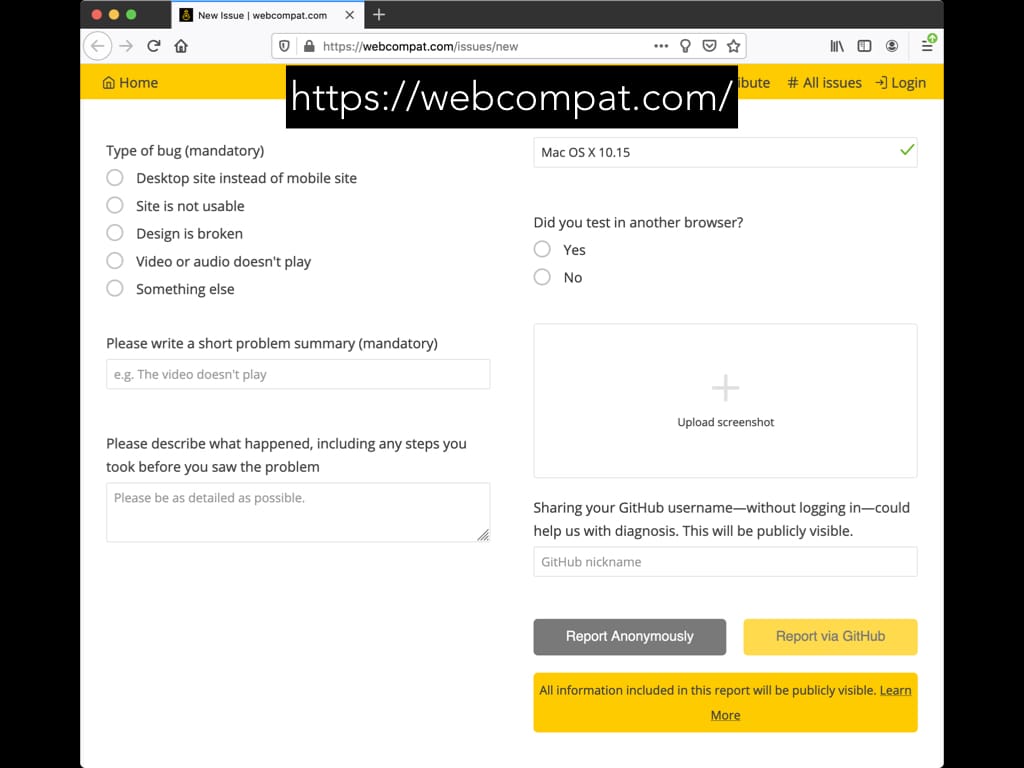 We, the Web compatibility team, created a form to help users report issues about website working in one browser but not the others. The report can be made for any browsers, not only Mozilla Firefox (for which I'm working). The majority of our issues are coming from Firefox for two reasons.

On Mozilla side, we have a good crew. 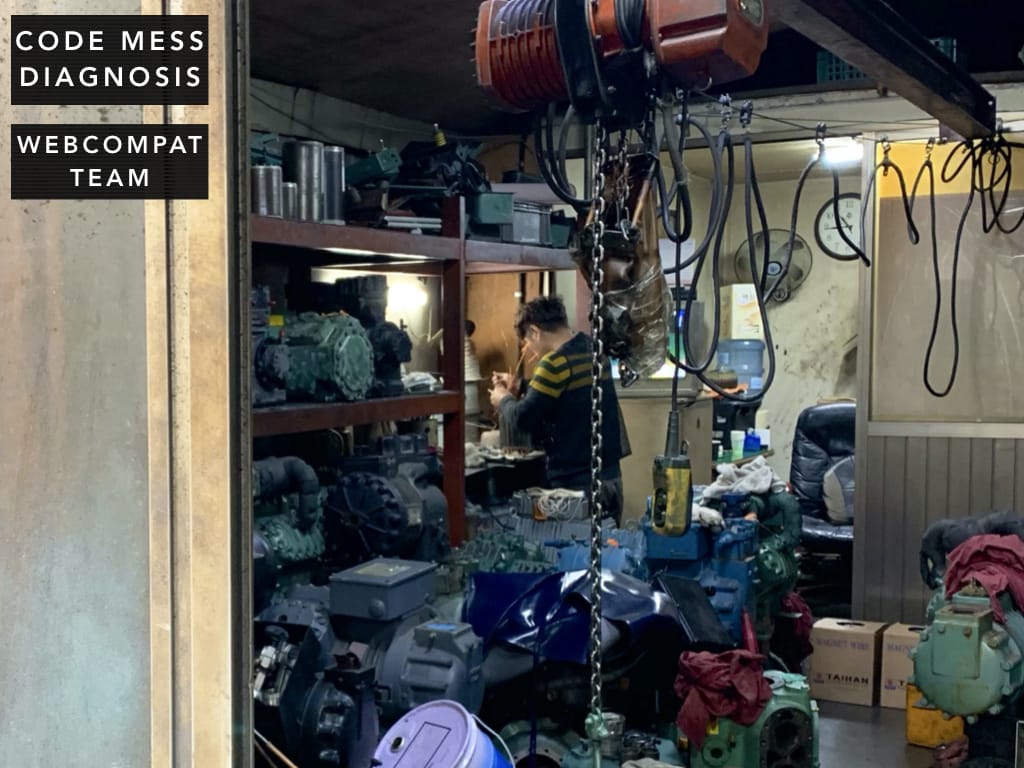 Every day, someone on the Mozilla webcompat team (Dennis, Ksenia, Thomas and myself) will handle the diagnosis of incoming issues. We call this diagnosis. You remember the messy website picture? Well, we put our sleeves up and dig right into the greasy bolts and screws. Minified code, broken code, unmaintained libraries, ill-defined CSS, we go through it and try to make sense of it without sometimes access to the original sources.

Our goal is to determine if it's really one of these:

Once the website has been diagnosed, we have options…

Charybdis and Scylla: Difficult or… dirty 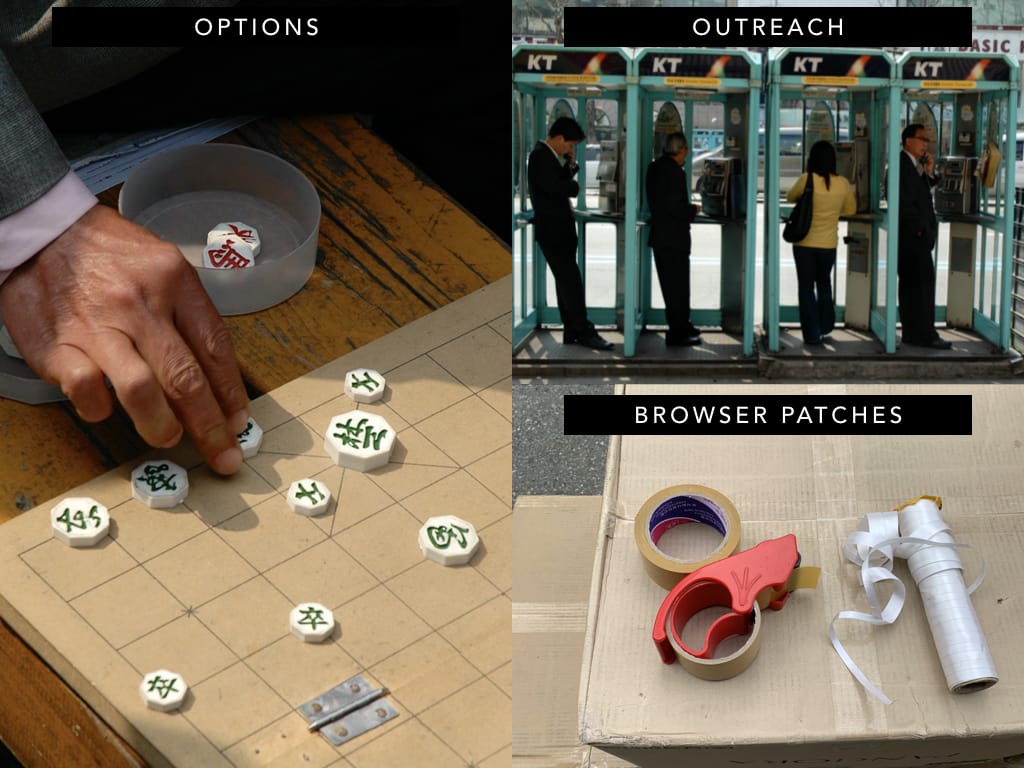 The options once we know what the issue is are not perfect.

Difficult: We can try to do outreach. It means trying to find out the owner of the website or the developer who created it. It's a very difficult task to discover who is in charge and is very dependent on the country and type of business the site is doing. Contacting a bank site and getting it fixed is nearly impossible. Finding a Japanese developer of a big corporation website is very hard (a lot of secrecy is going around). It's a costly process, with not always great results. If you are part of the owners of broken websites, please contact us.

Probably we should create a search engine for broken websites. So people can find their own sites.

Dirty: The other option is to fix on the browser side. The ideal scenario is when there is really a bug in Firefox and Mozilla needs to fix it. But sometimes, the webcompat team is pushing Gecko engineers to introduce dirty fix into the code, so Firefox can be compatible with what a big website is doing. These can be a site intervention that will modify the code on the fly or it can be a more general issue which requires to fix both the browser and the technical specification.

The Web is amazing! 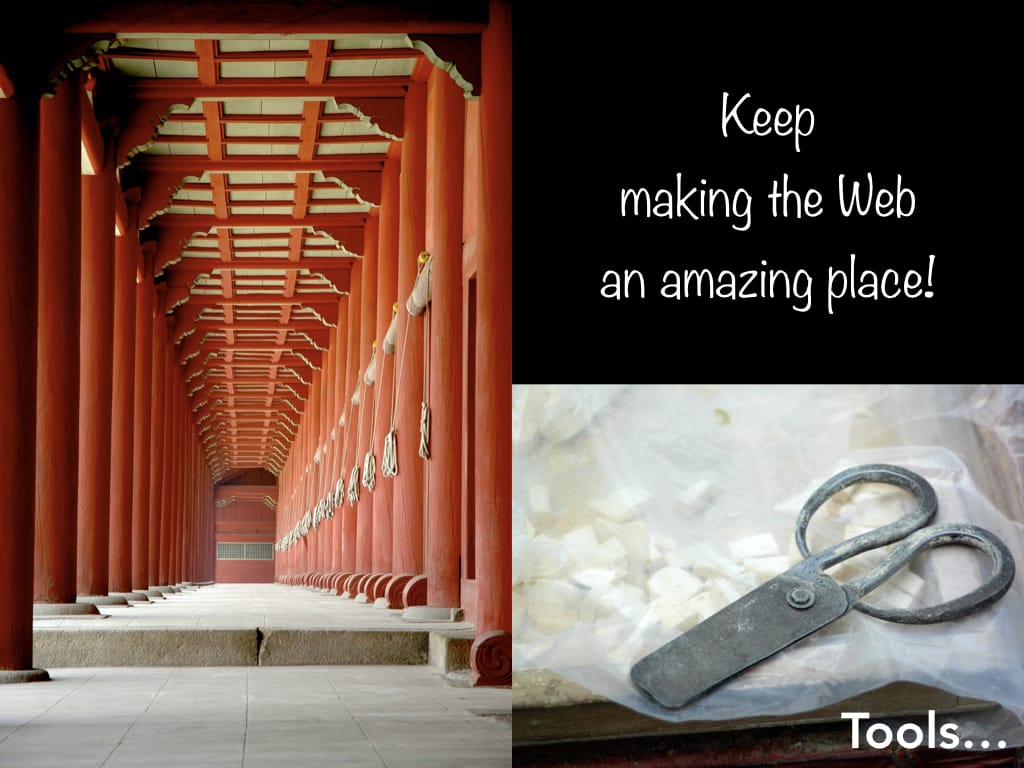 All of that said, the Web is an amazing place. It's a space which gave us the possibility to express ourselves, to discover each other, to work together, to create beautiful things on a daily basis. Just continue doing that, but be mindful that the web is for everyone.

Notes from a dilettantish speaker

I wanted to mention a couple of things, but I think I will do that in a separate blog post with other things that have happened this week.