Left home in between 5:30 AM and 6:00 AM. All geared up for the coronavirus outbreak just in case. Japan is not yet heavily affected. 3 cases at the time of this writing and all coming from Chinese traveling in Japan. Taking the train to Narita Airport. Then the plane to Brussels, and finally Brussels to Berlin. 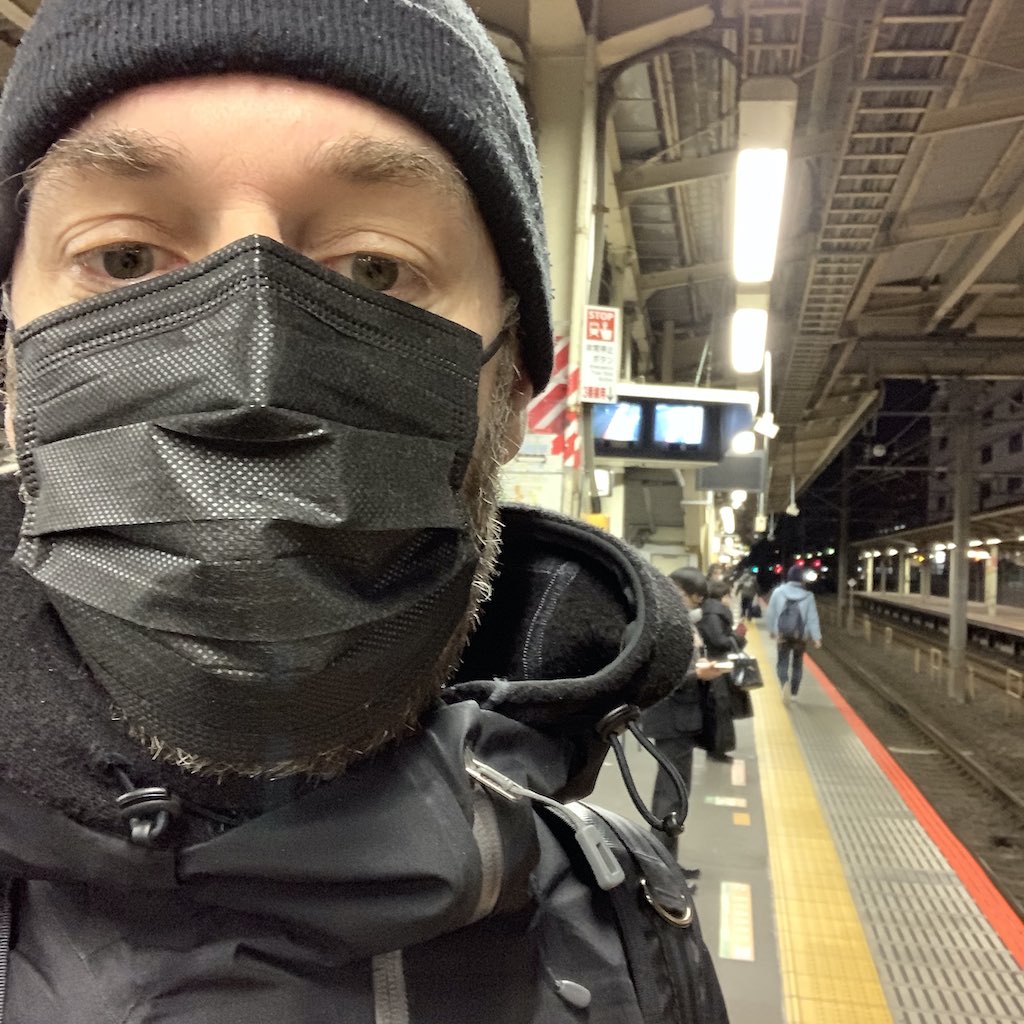 Funny story about the mask. In Japan and many parts of Asia, wearing a mask is fairly common. You do it for mainly 3 reasons:

My mask has been unnoticeable in the eyes of anyone until I arrive… Brussels airport. First I was the only one wearing one. Second people were giving me a inquisitive look. I think some were worried.

I then walked from the Berlin airport to the hotel. It's something I do time to time to better understand the fabric of a city and how it changes from its periphery to its core. Walking is the best pace for thinking. It was only a 1 hour 45 minutes walk. It was night. First time for me doing it at night. The exit of Berlin airport on foot is not complicated, but the mood is a bit spooky for about 2 km with the motorway on one side and the forest on the other side.

I had a quick dinner with Kate that I bumped into at the registration desk. And then I didn't try to catch up with anyone and went directly to bed after 22 hours of trip.

Japan has now 6 cases of coronavirus, including one person infected through transmission, a bus driver who drove around a Chinese tour group.

This is a very special All Hands. It's happening just two weeks after the layoffs. So this was in the mind and talk of everyone. The catharsis may help and we need to rebuild our forces, hopes, and tackles some of the issues of the Web. When I think about Mozilla as a place for working, I still think it is one of the best places to work on the open web issues.

I had written something about the controversial tweet of the week, but i decided to give it a separate article, because it was starting to be longer. So it will be published soon on this blog.

During one of our discussions, someone wondered if Mozilla should enter the search space by providing a search engine.

Mozilla doesn't need to create a new search engine, but there is definitely a place for privacy-focused search engine. Currently there are solutions for people looking for information such as DuckDuckGo. But DuckDuckGo just use the index of Google, and a couple of other sources to give results. They do not have their own indexer. So as a site owner if you are blocking most of the search engines, because you do not want your website to appear in an environment full of ads, there is no possibility for you to provide this information to their users/readers.

I would love to see a indexer which is on-demand that would build an index for people who don't want to be for example on Google Search or Bing, but would still be willing to be on DuckDuckGo. Another consequence of this would be to have a leverage to improve the indexing of the information with better structured content. As the mission is not to index the web, but to catalog people who are requesting it. I even wonder if site owners would be ready to pay this as a service. What would be the cost of running such a thing? Would DuckDuckGo be interested?

Should Mozilla help with this? Create a deal with DuckDuckGo?

"Time Machine" for the browser or personal WebArchive.

I want to be able to browse the Web keeping the history of some of the sites I visited. Basically keep a records of some targeted websites. When I go to let's say NY times homepage, I want to be able to save this page. If I go a couple of days later, the browser would remember I already visited this site and I would be able to access the previous instances as layers of timestamped-information of my previous visits. A kind of personal webarchive.

Mozilla AI plenary session was a good wake up call. A couple of speakers gave examples on the policies, the instrumentalization of ai to maximize profits (and not knowledge). I wish these talks were video recorded for public consumptions.

All-Hands are a great opportunity to re-think about what we are and what we do. I started to take notes on my laptop about the webcompat agencies.

A walk, in the evening, along some stretches of the wall. Graffitis and holes in an agency which was once a divider in a city. The first time, I came to Berlin, was in 1988, during a school trip (I was 19 at the time). We traveled by train from France to Berlin, crossing East Germany in a fenced corridor until we reached Berlin. Then we visited different parts of Berlin west during the trip. We had a special day though. We crossed checkpoint charlie and for one afternoon, we stayed in East Berlin. The contrast with the luxurious west part of the city was stunning. The quietness of the street we could see from the bus was stunning. A few trabant here and there. I think I remember that we went to visit the Pergamon museum, which was in East Berlin at this time. It was not imaginable that the wall would fall one year later.

Friday was the concept map day where we drew what webcompat activity meant for the Web and Mozilla. It was pretty cool to see everyone pitching in. I will redraw it properly later, but here an incomplete draft.

I published the meeting minutes we had during the week. These often doesn't take into all the little brain storming, here and there. The breakfast discussions which matter. The meeting in person for the first time someone else from Mozilla giving the opportunity to thank them directly about something they did in the past year that helped you a lot.

Also for everyone landing here through twitter or because they are following the Mozilla Planet feed, just publish simple work thoughts, codes, cool things you are working on.

It's not about being oustanding to your peers or appealing to your boss, it's about helping people who are less knowledgeable than you. We all learn from people who had the grace to share their own knowledge and help us to grow as a person or as a better professional. You can do exactly the same for people who are not at the same level than you.

Tomorrow long flight back from Berlin to Tokyo (via Zurich).